Switching from GlusterFS to DRBD and OCFS2

As my uptime reports have shown, and as some of you have reported, my blog’s load time has increased steadily over the past few weeks. It turns out that one of my VM’s was on a physical machine that had some trouble and I was reaching a point where GlusterFS’s replicate functionality couldn’t meet my performance needs.

Instead of using GlusterFS as I had before in my redundant cloud hosting guide, I decided to use DRBD in dual-primary mode with OCFS2 as the clustering filesystem on top of it. The performance is quite good so far: 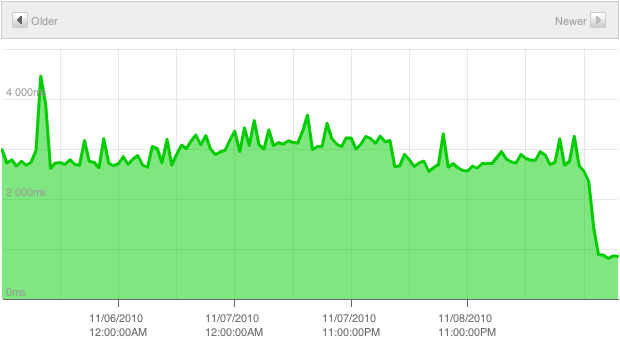 I switched over the DNS late last night and the response time has fallen from the two to three second range (during times of low load) to right around one second per request. In addition to the reduced load times, I can support higher concurrency without significant performance degradation.

Don’t worry - I’ll make a detailed post on this topic later along with a guide on how to set it up yourself.